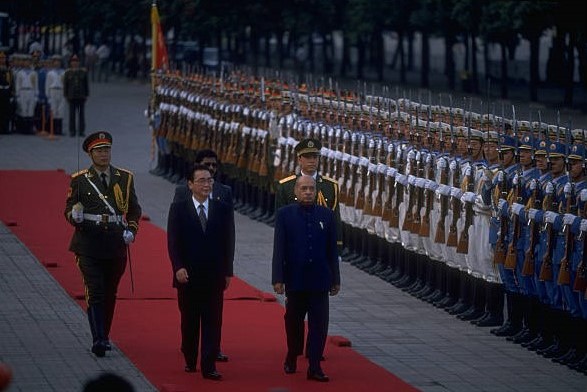 PV Narasimha Rao had the highest admiration for Deng Xiaoping. ‘[Deng’s] thinking,’ Rao said, ‘ was the single largest factor in giving a new orientation to Chinese political philosophy, still not doing away with prevailing beliefs in their external manifestations. I am reminded of the genius of the Hindu Law, which brought out different practical results from a particular Sutra to suit different areas and customs prevalent in them—by the method of multiple interpretation of the same Sutra by different commentators. Deng’s miracle is an object lesson to those wedded to different interpretations.’

It is notable that in 1994, the New York Times called PV Narasimha Rao the Deng Xiaoping of India, as acknowledgment of the reformist role Rao, then Prime Minister, played in enabling the liberalization reforms of 1991.

Rao never got to meet Deng in person – on the one occasion he traveled to China, he was tragically denied the opportunity, as set out in this excerpt from Vinay Sitapati’s book Half Lion:

In 1993, Narasimha Rao prepared to travel across the border—3500 kilometres of it. The boundary with China had been demarcated by the British in 1914, and India took that line to be non-negotiable. The Chinese had never accepted the value of the British line, and this difference of opinion led to border hostilities in 1962. India had been pounded in the war, and relations had since chilled.

When prime minister Rajiv Gandhi decided to break the ice and visit China in 1988, his foreign minister Narasimha Rao had concerns, but soon fell in line. Rajiv established three working groups with the Chinese: on the boundary dispute; technology; and the economy. But it was the sheer optics of the visit that improved ties. The then director of the intelligence bureau, M.K. Narayanan, says, ‘There is no denying the fact that the Rajiv Gandhi visit created a major change.’

Narasimha Rao had been part of the Indian delegation to Beijing in 1988. As foreign minister once before in the early 1980s, he had watched Deng mouthing Mao while moving towards the market. Rao had learnt from this doublespeak and was looking forward to finally meeting his idol. But—as we saw in an earlier chapter—Rajiv chose not to take either his foreign minister or foreign secretary with him to meet Deng. He only took along two relatively junior officials, one of them being Ronen Sen. ‘Rao was very, very hurt,’ a bureaucrat present remembers. ‘He felt he had been slighted.’

In December 1991, soon after Rao became prime minister, Chinese premier Li Peng had visited India. In preparation for the visit, a former Indian ambassador to China had sent Rao a ‘personal note on India China relations’. The note sketched out the personality of Li Peng, ending with ‘Multi-party democracy, political pluralism, human-rights of a western kind, social permissiveness among youth etc. are all anathema to him’. Rao underlined that sentence, as he did the conclusion of the note: ‘He is still the man with whom we must do business at least for a little more time to come.’

So nuanced is global diplomacy that most prime ministers defer to their mandarins. Not Rao. In the note, the former ambassador had recommended that ‘India and China could cooperate for South Asian prosperity. Why not think of Joint Sino- Indian projects in Nepal and Bangladesh.’ On the margins, in precise, slanted handwriting, Rao wrote: ‘On the other hand, this will only tend to enhance Chinese influence in these countries to our detriment. The ganging up of our neighbours against us will get a shot in the arm. This may not be tried just now.’

Two years after Li Peng’s visit, Rao returned the favour. When he travelled to China in September 1993, he spoke to President Ziang Zemin of civilizational links. As the diplomat Prabhakar Menon (at the time a joint secretary in the PMO) put it, ‘Rao felt that India and China were bound by deeper, philosophical ties more than by a grocery list of things to sell and buy.’ The highlight of the visit was the signing of the ‘Agreement on the Maintenance of Peace and Tranquillity along the . . . India-China Border Areas’. The pact created a separate mechanism to resolve the dispute, while laying out a series of measures —such as reducing troop movement on the border—designed to defuse tensions.

The agreement was classic Rao. Faced with a border dispute that seemed irreconcilable, Rao isolated it from other aspects of the Indo-China relationship. This logic has worked well. Trade relations have boomed while, as Ronen Sen says, ‘Factually, China is the most peaceful border we have with any country, thanks to Rao.’ ‘I do think the peace and tranquillity agreement is a landmark,’ M.K. Narayanan agrees. ‘You can keep arguing [about the border] while delinking it from the rest.’

While the trip was a diplomatic triumph for Rao, it was a personal failure. Rao wanted to meet Deng, something that Rajiv had denied him in 1988. Deng had by now retired from active politics. He declined to meet with the visiting Indian prime minister. The gossip was that Deng would have agreed to meet someone from the Nehru-Gandhi family. Rao was not considered worthy enough.